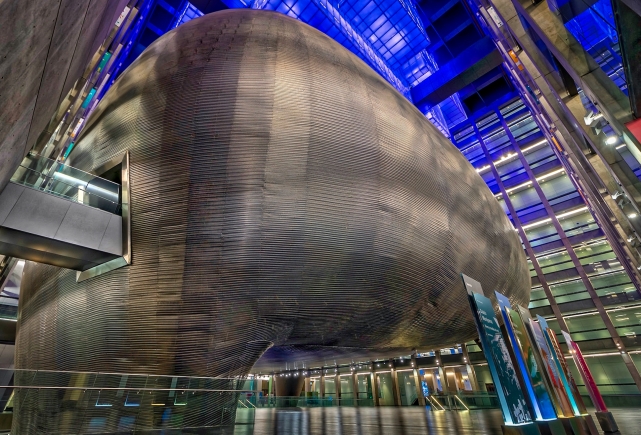 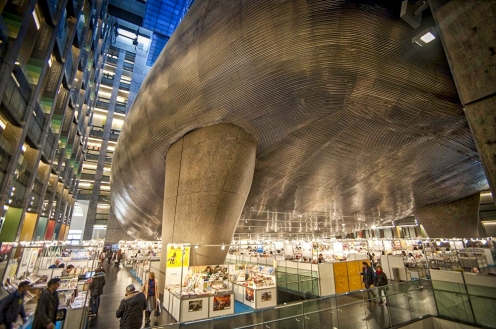 The imposing Palacio de Correos y Telégrafos in Retiro, built in typical French Second Empire style, opened in BA in 1928 after 40 years of construction and much political in-fighting. Fast forward 87 years and again, after much wrangling, controversy, scandal, restoration and rejuvenation, the Centro Cultural Kirchner (CCK) opened to much fanfare in 2015 – some say, an enormously expensive vanity project for President Cristina Kirchner. More on this later.

The CCK (as it’s locally known) is the largest cultural centre in Latin America and the third largest in the world with a staggering 100,000m2 of space spread over nine floors.

What is truly breathtaking about this building is what’s inside, for much of the interior is one enormous open space with an enclosed metal-clad 1,750 seat concert hall seemingly floating in mid-air, high up under a massive glass roof dome. It’s called the Ballena Azul (Blue Whale) and has reportedly some of the best acoustics in the world.

It’s a stunning building and an amazing restoration but unfortunately it appears to be permanently closed. I can’t find out why, it just is. There’s a ton of building and restoration still going on around the site with what appears to be an enormous public plaza close to completion, but it remains closed off, so I guess (hopefully) it’ll reopen before we leave and I can take a proper look at this intriguing space.

The CCK is named after President Nestor Kirchner who (only in Argentina) instead of seeking re-election whilst in office, stepped aside in 2007 in support and in favour of his wife, Cristina, who was duly elected in his place. Nestor Kirchner died of a heart attack in 2010 and, whilst President, Cristina oversaw the commission, restoration and repurposing of the building. Cristina is still very active in politics here and is once again running for President in October against the incumbent Macri, though perhaps not surprising for Latin America, is mired in corruption scandals which fill the newspapers and TV channels here on a daily basis.

This video clip brings to life the history and rejuvenation of this incredible building.