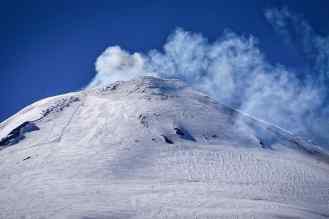 The drive up to the volcano starts off rather understated, a nice smooth dual carriageway, a couple of genteel roundabouts, beautiful lake-side homes trimmed with colourful hydrangeas and then a very gradual climb away from town, past new condo show homes extolling the wonders of living in this lake-side paradise – underneath one of Chile’s most active volcanoes that is. It’s an easy climb at first then the sealed road ends and the potholed switchback corrugated (teeth-rattling) gravel roads begin.

There was hardly anyone on the roads up to the volcano early this morning in glorious clear summer sunshine. There were, however, a couple of intrepid cyclists slowing inching their way up, presumably to the same spot we were aiming for, the Centro de Esqui, but gosh, what an effort given the rough condition of the road. The ‘Ski Centre’ is closed for the summer and looked very sad and sorry for itself, with its silent chair-lift and no purpose other than a turn-around post for day-trippers such as us eager to approach the summit. Surprisingly though, there was no one here! Where were those hyper-active youngsters looking for adventure in Pucón yesterday? Had they already reached the crater perhaps, or maybe they were off doing some other dare-devil activity?

I’m sure this is a wholly different place in winter when the same ‘road’ up would be impassable without chains (seasonal warning signs all the way up – Ant) and, I would have thought, a courageous grip on the steering wheel and handbrake would be essential.

Volcán Villarrica is very much alive and clearly belching out a sulphurous white plume that seems to get larger and more billowing as you get closer – there’s no sound, no rumbling noises, so it seems, thankfully, the giant sleeps for now.

The whole area around Pucón (Region De La Araucańia) feels like one giant enchanted forest and one of the most beautiful regions I’ve come across. High up in the foothills of the Andes it revels in towering snow-capped mountains, active volcanoes, thermal springs, large deep lakes and spectacular cascading waterfalls such as our local beauty, Ojos del Caburgua – not to mention the rolling lush green hills and deep wilderness areas of Parque Huerquehue where you can (if you’re up for it) trek for days and days without encountering another soul, all the way up to (and presumably over into) Argentina. Just you and the soaring condors.

We’ve been tempted by the many Termas (hot volcanic thermal springs) around the area, with thoughts of lolling around in hot thermal waters, but with the afternoon temps here pushing into the mid 30’s, the thought of sitting in water that’s approaching 40 degrees has put us off this idea. I think we’d cook ourselves! No, I think these are best suited to winter months, particularly snowy days – now that would be idyllic!

So, thoughts turn back to the fast-flowing river running beside the house. Yes, it’s cold, but on a hot afternoon that might be just right for a dip, a quick in and out mind you.