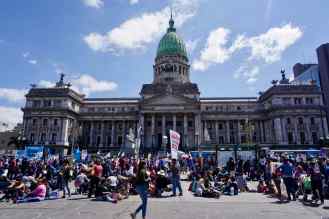 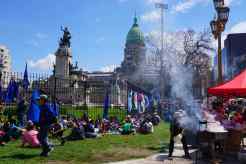 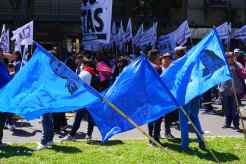 You’ll see long orderly queues for buses, cake shops, Western Union, newsagents, ATM’s and doctors, or anything really, so fall into line and behave yourself, because that’s how we do it here. Everything, unexpectedly, is very well ordered in BA (Suggestion of a British influence perhaps? – Ant).

You’ll wait just a few minutes for a bus or the Subte, it’s so efficient, frequent and fast you’ll never have to queue for too long… oh and a ride on the Subte costs just a few cents (like A$0.30) despite its recent controversial price hike.

Built in 1913, the Subte is the oldest subway system in Latin America and the 13tholdest in the world. It’s super cheap and clean, though it does get packed during rush hour, or any hour for that matter. There’s always some form of entertainment, wandering minstrels playing for tips, some good, some not. We had one excellent guitar-strumming busker recently and the whole carriage burst into applause. Nice. Though we also had a tattered tramp riding one stop, he stank so blatantly that the whole area around cleared and people held their noses and dived into neighbouring carriages. The SUBTE is clearly so cheap that tramps can ride… and possibly live… on board.

Pretty much each and every day here in the city you’ll come across a demonstration or a march through the streets. All anti-austerity and anti-government of course, but they’re all, as far we can gauge, peaceful and well-organised events. Early morning around the main stations people will stream in from the outlying barrios, equipped with banners, drums, whistles and anything that’ll make a loud racket. Once corralled, they’ll head off noisily to a particular government building or better still, like today, to the seat of government, the Palacio Del Congreso*. Hard to tell how many people were gathered here this afternoon, seemed like many thousands, but because the plaza is so huge they felt evenly spread out, but still boisterous and vocal, with football matches, sizzling smoky hot dog stands, ghetto blasters and bombon sellers.

It’s sobering to consider the plight of these working-class Argentines. Inflation is running away into double digits, the peso is dropping in value like a stone, interest rates are already stratospherically high, the unemployment rate is almost 10% (national average) and jobs are increasingly being made redundant, with little prospect of getting another, as belts tighten and the austerity measures really start to bite.

We’ve often been told that we’re living in a bubble here in the city – it’s one huge glorious glass-domed bubble, but a bubble it is, for just outside of the city, in the outlying suburbs, the situation is grim and about to get a whole lot worse.

*If you think this building looks familiar, it’s because it was modeled on the Capitol Building in Washington DC and completed in 1906.