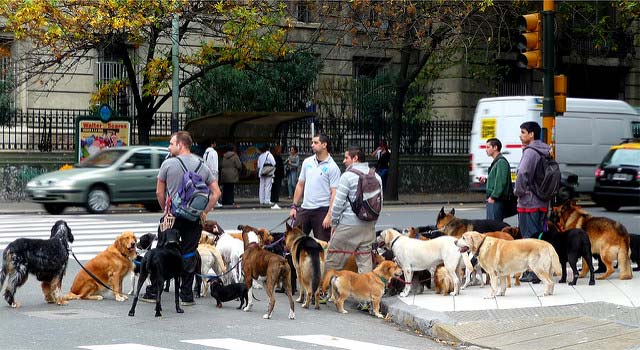 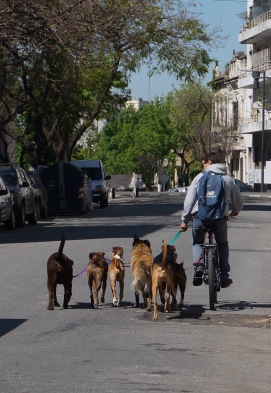 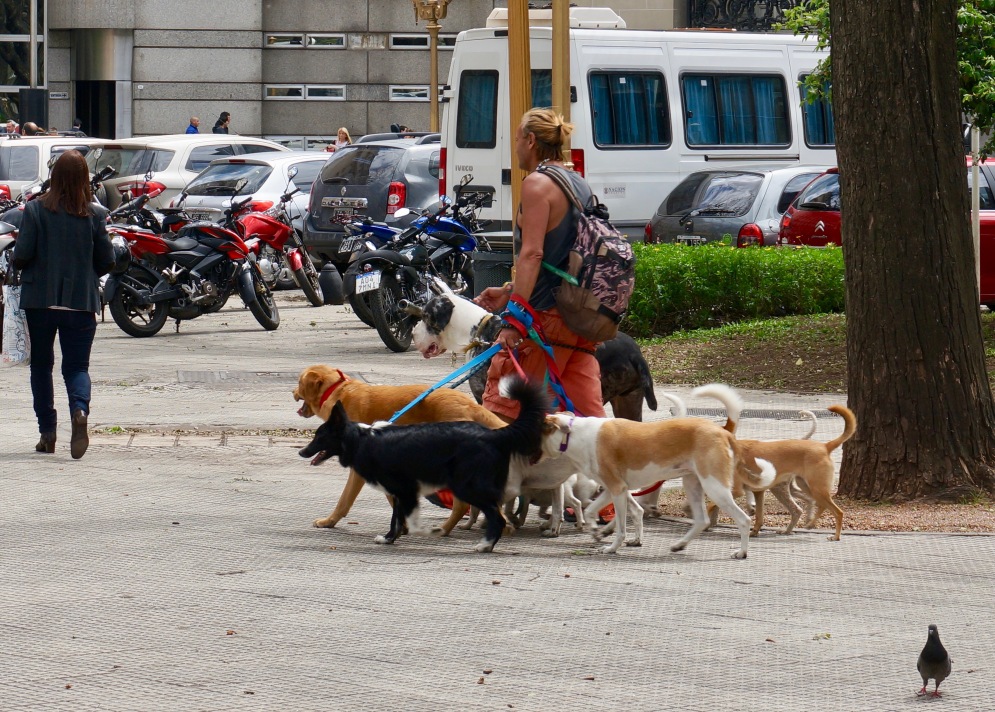 The vast majority of Porteños live in apartments, and Porteños love a dog, so for those who work a full day (most of ‘em), the dog walker is the go-to solution in BA. They’ll pick Alonzo (one of the more popular local dog names apparently) up in the morning and return him in the afternoon or even better, just when you’re home from work. Mind you, they’ll pick up and drop off a posse of other dogs too, so it’s a full-time business.

Some of the dog walkers can be seen with up to 20 dogs pounding the pavements – I saw one the other day on a skateboard being towed by at least 6 dogs down the middle of the street. What’s amazing is that they’re – mostly – all so well behaved. And they’re not confined to parks, of which there are many here. Oh no. They can, as I say, be seen forging along city footpaths in rush-hour, pausing patiently at stop lights then lurching across the road like some arctic dog-sled team.

I read one report that said a dog walker can make more money than most vets, charging up to US$100 per dog per month, so that comes in at around US$1500-2000 per month based on walking a mind-boggling 20 dogs a day – that’s ARS56,000-74,000 a month, easily a living wage for a local. Mind you, it takes a special sort of person to be able to handle 20 dogs at one time, let alone the fights that can break out – and I’ve already seen quite a few – though from what I’ve also observed the typical number of dogs per Paseador is around 6, so that’s a more realistic US$600 per month or ARS22,000 pesos (AUD$27 per day) which may not make it such a career move after all.

Apparently there are laws that regulate the Paseadores, but in true Buenos Aires style, no one pays much attention. Here are some of the basics:

Some dog walkers do this on an industrial scale and pick up a whole pack of dogs in a van, take them to a park where they spend all day running around, then drop them off home individually in the evening. Some of the more business-minded Paseadores offer a sort of luxury day-care ‘hotel’ in summer, complete with swimming pool, meals and grooming. Wow, it’s certainly a dog’s-life here!