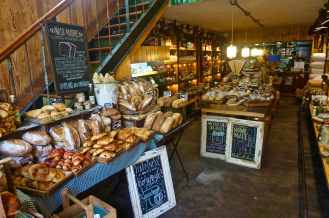 As you may know Argentina is world-famous for the quality of its beef and you can have an incredible steak here for just a few dollars. The steak will be cooked to melt-in-the-mouth perfection, served with a fresh green salad and a bottle of local Malbec for A$28 (£15) for TWO PEOPLE!

Similarly, grocery shopping is cheap, but then again, eating out is so incredibly cheap you might as well take the less labour-intensive option.

We had a late Sunday lunch around the corner on Caseros at one of the most intriguing and unusual restaurants I think I’ve ever been in, called Napoles. It’s deceptively squeezed into the base of a Belle Epoque apartment building, opening like a Tardis, dark and cavernous on multiple levels and packed – Sunday being family day out – to capacity (with well-dressed people), vintage cars parked outside and inside (Bugattis), motorbikes (Norton and Harley), antique stone statues, old wooden boats and canoes, racks and racks of vintage clothing (think leather jackets and real-fur coats) and a dizzying array of vintage toys, arcade games and old stuff… and again, the food and wine were delicious with a meal for two at ARS1500 (A$50)… and then once you’ve dined you can shop till you drop. There’s an aged leather butcher’s apron with my name on it. Can’t think where I’d where it…

Spring hasn’t quite sprung into force here as yet. It’s been a bit cold, gloomy and overcast here with the occasional shower, but sunshine is forecast and a warming trend, so looking forward to getting out and about. We have a SUBE card for the underground to hand and can explore this massive city of some 13 million at length over the next 2 months. First stop will be the hippest part of town, Palermo – there’s Palermo Hollywood, Palermo Viejo and Palermo Soho and most probably any number of newly coined names for this cool and fashionable barrio.