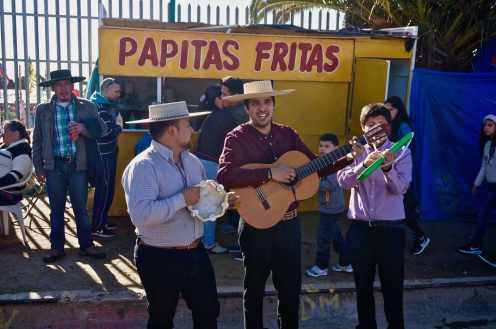 Terremoto is a traditional ‘earthquake’ cocktail served in a 1-LITRE glass (yep that’s right) consumed over the Fiestas Patrias holidays, which may account for the late risers sleeping off their hangovers this morning. Take lashings of pineapple ice-cream then pour in and fill to the brim with a bottle of Pipeño white wine… then to finish it off (or finish you off), lace the whole thing with a stream of grenadine or Fernet Branca.

If you dare, you can order a Richter 8 which will probably render you somewhat shaky and then, if you’re still game, you can order a half litre ‘Replica’ or ‘Aftershock’ which if the first one didn’t do the job, the second should definitely knock you to the ground.

I think I’ll take a real terremoto, at least it won’t me sick.

As I mentioned before, the Fondas didn’t kick off until 8pm and would have been packed well into the night, if not the wee small hours. There were a few tipsy revellers weaving the streets this morning, no doubt fuelled (if that’s the word) by at least one Terremoto and probably many Aftershocks.

I’m afraid we didn’t fancy the fields of mud and the thronging (increasingly drunk) crowds, also not a good idea to pull out a camera and start shooting, hence the few shots I managed to sneak in before copping some stares and the occasional verbal.