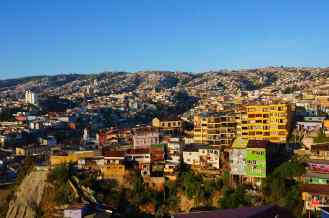 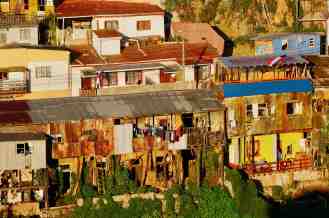 The clouds (and fog) lifted overnight revealing a Valparaíso dawn bathed in a golden, jewel-like glow. It’s often said (by Paul – Ant) that this place is like a tipped up paintbox, and they’re (he’s – Ant) not wrong!

It’s Fiestas Patrias long weekend here (‘Patriotic Festivities’ for Chilean Independence Day), which peaks on Tuesday so Chilean flags fly proud. I found out that it’s technically illegal not to have a flag on your house and you can be fined by the military police if they catch you – three hundred dollars – imagine that!