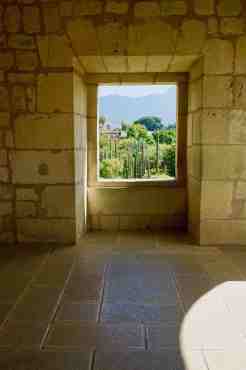 Our wake-up call this morning was a 5.7 earthquake, first the city siren with calm evacuation instructions, then a few seconds of shaking. Nothing really to report home about beyond a brief adrenalin spike, but thank god for the house chihuahuas, Yoko and Michael (yes, both named after music world identities – Michael has a white glove on one foot – and yes, pics coming) who came running to the rescue, only to be thwarted by falling figs – they made a hasty retreat but not before nabbing a few select choices on the ground. Bless ‘em.

We spent the morning in the glorious Museo de las Culturas de Oaxaca, adjacent to the Etnobotánico (yesterday’s find). What an incredibly airy and light-filled stone building with large, completely unglazed windows and glorious arch-framed vistas at every turn.

Again dating from c1575 and a Dominican Monastery in origin, the cavernous (now) museum contains some fascinating early Zapotec artefacts, many from Monte Alban, a nearby ancient Zapotec citadel that we’re saving for the coming weeks (the principal treasures of which are of course in Mexico City). The ones we saw today are strikingly bold, dramatic, and, in some cases, quite comical in their naïve depictions of Rats, Mice, Rabbits and Jaguars, whilst the human pottery figures are hauntingly realistic with animism a strong theme in pretty much all Mesoamerican cultures. Though one particular statue bore a striking resemblance to something from ancient Egypt, even with (seemingly) hieroglyphic cartouches. Add this to the proliferation of Aztec and Mayan pyramids scattered all over Central America. Hmmm…. don’t get me started…!