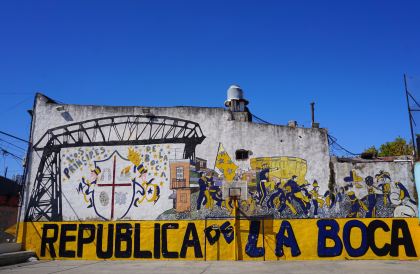 La Boca, the working-class barrio south of San Telmo is of course home to La Bombonera and the infamous Boca Juniors soccer team. You may have read previous posts from our time here in November when La Boca played (or tried to play) its arch-rival River, in the Copa Libertadores final that never was. Well, not on Argentine soil anyway. We witnessed three failed attempts to play the match, all of them in packed local bars, full of ultimately agitated, aggravated and then disappointed Boca fans – with every attempt thwarted for various reasons, torrential rain, riotous fans and finally, sheer exasperation.

Saturated in vivid blue and glowing yellow. We’re not one for organised tours so we didn’t ‘follow the leader’ around the stadium but chose instead to soak up the local atmosphere and, where possible, wandered off into the hood to experience the ‘real’ La Boca. However, I have to say that this is not generally advised, as the only ‘safe’ area here is between the stadium and the narrow alleyways and colourful zinc shacks of Caminito that attract the enormous ‘snap-and-go’ tour buses that are so out of place here in this working-class barrio.

There’s a wonderful brightly coloured and ring-fenced soccer pitch on the far limits of where the tourists get to with three-foot high words “República de La Boca’ which according to folklore saw La Boca declare itself a republic for a brief period in 1876.

La Boca, and in particular the area of Caminito is famous for its brightly coloured sheet metal buildings that positively glow in the late summer sunshine. Some say that the mix of bright colours come from the custom of using leftover paint from the different ships that passed through the port as a form of payment, but then other stories insist it’s just down to a move to brighten up the streets… who knows. Anyway, La Boca positively beams in the sunshine.